You are here: Home / My Childhood / Angry Child 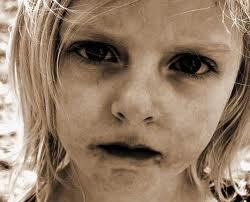 A little bit of background is appropriate before this story. During the 1930’s to the 1950’s maybe it was customary to beat a child for misbehaving. It was done by every parent I knew and nothing special, it was what parents did. Spankings for doing something wrong were the ‘norm’. Nurturing was not encouraged, “positive reinforcement” was unheard of. Personally I feel it created a lot of anger in the children, I know it did in me. This was the cultural climate in which German children faced the Nazi nightmares.

My father followed this mode of parenting to the letter… and then some. It is clear to me today that my father had experienced very harsh discipline himself and that he had his own stifled barrel full of anger as the by-product! I must wonder if my dad ever muddied up a sparkling clean kitchen floor venting his anger as a child! Ja so, that having been said…

When dad was still alive things were easier, from a child’s eye anyway. And of course for mom. She relied on dad in so many ways. He was her Knight in Shining Armor! Dad had his ways to deal with disobedient children. His ways were: Beat their behinds. This would always happen in the entryway and usually mom would be in the kitchen working on something.

Dad had been in Halle and brought back a handful of very pretty picture cards for each of us children, Thea, Helmut, Schnippe and I.. were suppose to pick two cards to keep for our very own. I could not decide between one and another card.. they all were so pretty, so what was I going to do? Finally I decided to be sneaky and take 3 cards, instead of two. I knew I had stolen and my heart was racing.. oh what would happen to me if Dad found out? Unthinkable!

Two or three pretty picture cards do not seem like a huge deal now in our days of plenty. But for us at that time.. it was a huge deal. Dad brought a gift back from Halle.. just for us.. yes, this was big.. and I.. well I.. this bad and wild child had now stolen.

I went downstairs, clutching my three cards.. not two.. Oh no, I had three.

Then I heard it.. upstairs dad was pacing the floor. Back and forth.. hard loud steps. Had he found out about my theft?
On the pacing went, I was shaking with anticipation.. in the knowing of what would be next.. and here it came: “Down the steps dad came.. his face red with anger.. and I heard him say: “One of my children just stole from me.. A D E L H E I D! was it you?” Too scared to lie on top of stealing.. I admitted to taking three cards instead of two.

Dad said: “My own child did steal… it is unbelievable.. where did I go wrong teaching my children right from wrong? Adelheid.. come here!” I obeyed, we were standing in the entryway by now. Dad grabbed me.. put me over his knee and whacked the living daylights out of me. I screamed.. he kept hitting and I screamed some more. Then I heard mom’s meek little voice from the kitchen: “Theo, please stop!” Theo did not seem to hear, he was not done punishing me for my crime. At least another 15 smacks I got.. all in all about 50 hard smacks …for one picture card? I decided it wasn’t worth it.

So I whimpered.. for dad to stop.. and that I would never ever.. ever steal again! Finally he relented, my behind was burning like fire. I heard mom sob.. and I noticed that dad was out of breath. …All this for a stolen picture card.

It was so rare for us to ever get the tiniest gift or surprise.. But this was the way dad dealt with dishonesty. I was angry.. very very angry after this incident. And this anger showed itself a bit later.

Mom had a cleaning Lady a few times a week, who helped her in the kitchen. To have this help for mom was a huge luxury.. and it stopped when dad died! This lady’s name was Hilde.. and she just had cleaned the kitchen. It actually sparkled I thought. “Too clean” I said to myself, and I decided to make a mess. I went to the sink, got some water.. and splashed this water on the fllor, then I walked around in it with my dirty bare feet, thus making a huge mess. I heard Hilde scream: “You are making a pig stile out of my clean kitchen…!” My anger from the beating still very fresh in me, I countered: “Yes, I know.. and you are the Pig therein!” Wow.. unheard of.. me, being this mean to anyone? I heard Hilde sob, and of course, running to dad with the pain I just caused her.

Then here he came.. down those stairs saying to me: “Did you just call Hilde a pig”? “Yes Sir, dad..!” I replied

What happened next is of course easily figured out. I got my behind beaten again. But.. thing was.. I was still numb from those earlier whacks.. so it did not even seem to hurt much.

I remember Helmut saying:” Aetsch.. You got it again and you cried! When I get it, I never even cry. You are a girl.. boys don’t cry!”

The ways dad taught us honesty were harsh.. but they worked. Thing is.. they left me angry and at that time I promised myself that if I ever had children, I would never ever beat them. I have to ask my children.. if I kept this promise? …Was trying to be lighthearted here.. no, I never did beat my children. not hard anyways.. just a little “klaps” here and there.