You are here: Home / My Childhood / Die Huckekiepe 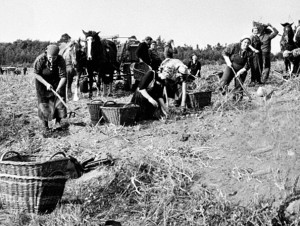 Firstly, I must translate this monster of a word, because it is exclusively “Brachwitz-sch” No place in Germany is this word understood.. it existed in Brachwitz only, as far as I know. Huckekiepe is a huge basket that is strapped onto your back.It was carried by farm workers only and contained things out of the fields.

When times became so bad and hunger was beginning to make us weak and certain death kept knocking at our door, mom turned into something I never would have believed she was capable of. Yes.. mom became a fieldhand.

What a mother won’t do to protect her kids. Mom was no exception.

One of our next door farmers gladly hired her to work in the fields. This tiny woman with this heavy Huckekiepe on her back was a sight to behold. No.. dad would never have allowed this but then.. he was gone.

Tante Hanni and tante Grete did what they could to feed us but their abilities to keep us alive were limited, after all.. they themselves had to eat too.. right?

Right now it feels to me that I am talking way too much about food. Unless though you have been there, there’s just no way to fathom.. what food, or the lack thereof, means to the human being. Survival.. this incredibly strong instinct we have.

So.. mom strapped this monster on her back and went to work in the fields. Admirable if I think that those hands and fingers of hers were an organist / pianist.

She always was very careful to not hurt her fingers.

But now.. here she was: a “field hand”, just like all the other women in Brachwitz.

Early in the mornings our cobblestone streets were abuzz with the noises of horses and the big wagons they pulled. Horseapples all over on the streets. Fresh ones daily, older ones would dry up and geese, ducks and birds would take care of it.. it was part of their daily feed and diet. Thus the streets were fairly clean if you know what I mean.
Off mom went, only to return in the evenings totally exhausted.. but always bringing home something edible.

I know she never would have ” stolen” a thing, because I remembered the ” sugar beet” story real well.

This went on for a long time and mom became fast friends with all the Brachwitz women. She became very respected yes, even popular if we want to use that word.

(AOL is starting to bug me.. interrupting me.. for some weird reason, I will ignore them as long as I can) Creepy! Leave me alone, can’t you see I am writing? What do you want from me?

On I go, ignoring them!

Is there something politically incorrect I am saying? If so, then I have a comment right here: I will always say what I believe and think, I will never.. as long as I am alive.. be “politically correct”. In fact.. if you care to remain living in a FREE country.. please do the same!

One evening, mom came home with something wrapped in paper.. and she came straight to me to get my opinion. Wow.. who, me? My feedback was important? I didn’t think this would ever happen, Mom wanted MY opinion, wow and wow again!

She carefully unwrapped the paper and displayed a big hunk of delicious meat. Here’s the kicker : She said.. oh please don’t tell anyone.. it’s, it is Horse meat! Yo! Yes.. horse meat.

The farmer had to put down a horse because of a broken leg. So now they were stuck with a dead horse and they didn’t know what to do with it. So they asked mom if she had an idea what to do. What a dilemma.. we didn’t eat horse meat, for some reason this was a no no.

But.. as deparate as we were, who cares? So I told mom ” we keep our mouth shut, we fix meals with it and we tell no one that it’s horse meat.”

The younger kids would never have known the difference.. well and mom and I.. we would act as if nothing was wrong, we would just start eating and act “normal.” It was mom’s and mine little secret, somehow I was so proud of myself, having been drawn into mom’s confidence. I felt all grown up and so important.

The horse meat was devoured.. and no one ever found out about it. Well.. until now, you know?

Share this:
Filed Under: My Childhood Tagged With: fieldhand, horse meat