You are here: Home / My Childhood / Endless Memories / Oma Moves In 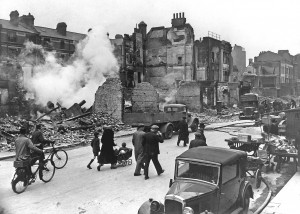 The more I write and dig into my memories, the more is coming back, or so it seems. And of course the good thing is that one always can stop reading should it get boring. To me though it is a certain unloading, because indeed it all is much to lug around in the memory box. Hopefully some of what I write is helpful to someone reading it. Jesus said something about carrying around loads that are too heavy for us. He said to give these loads to Him because He could carry it easily, while we can not. Other than writing things down right now.. and unloading… I must say that the biggest help I had with lugging around heavy memories, was indeed.. unloading them to Him. What a friend we have in Him.. in Jesus. Not enough emphasis can ever be put on the fact.. that God can.. while we can not!

My little blog is not going to turn into a sermon though, I am merely expressing my very personal and countless experiences. And, here it is in a roundabout way.. another one of those memories. As young as I was I had to learn to not trust anyone. What I mean is that humans are just that, humans. Even if they have no intent of hurting you, they can. For instance.. during a time where Society is under tight control as in Nazis, Communists or even just a time where much emphasis is put on “political correctness”, it’s so very easy to get yourself into trouble. I learned at a very young age to keep my mouth shut.. or else Dad would be “hauled off!” How then, is a child supposed to keep their mouth shut if it is something that so drastically affects his or her life? The reader will get my point, and to not become philosophical here, I will cut to the memory, the memory of a 7 year old.

Oma was a lively outspoken busy lady. She had been widowed at a young age. She had a little apartment in Halle. It was cozy and warm and I loved to be with her and have her tuck me into bed at nights. She was not so crazy about having me stay over at her place, but of course I did not know this at that time. Bombs were falling nightly and all of us were tired a lot, because there was no night we did not get trumpeted out of bed to run to the basement for cover. Halle was in ruins, I remember walking through the streets with ruins still smoking, little flames still burning and the smell was unforgettable.

More and more people were bombed out of their homes and placed by the Government with people who still had a home. Brachwitz was never bombed, so we had to take in hundreds of people who were recently homeless. Having lost all their possessions.. even loved ones, those poor people were crammed into our homes. Living quarters had become sparse.. and it was getting worse with every bombing. People started looking for a place to live.. however temporary this might have been.

Oma’s place was one of those yet untouched by destruction, and was located in a peaceful pretty part of Halle. One little old lady living in an apartment all by herself.. what a luxury. There was one couple who had a small child, who were just recently bombed out of their home. Everyone can understand their desperation of course but what this can do to the human psyche is something else. They were looking for a place to live and somehow found out about Oma.. and her luxurious living quarters. Somehow they managed to get her kicked out of her home, so they could move in. Herr Dollinger had his ways. He somehow found someone in authority and power.. to toss Oma out of her house. Call it survival instinct or just plain good old cruelty.. Oma was made to move out.. so the Dollingers could move in.

Now where was Oma going to go? To Brachwitz of course.. untouched beautiful little farmers’ land, Brachwitz, into our house. Never mind that we were already jam-packed with people who had to flee their homes. They came from Koln, Hamburg, Berlin.. every big city one can think of. At one point.. there were 5 families living in our home. Mom was beside herself.. all these women in our little kitchen and this kitchen was the only room in the house with running water. The traffic in this kitchen was unimaginable, and mom.. well mom, just lost it. The women would scream at each other.. just because of the stress.. no other reason.

Frau Liebig being one of the nicest people, in fact.. she became a lifelong friend and a priceless precious memory.
I wrote about her in a previous part.

Now it was Oma’s time to find a niche in our already packed house. Somehow we managed to make room for her and she remained with us til the day she died. 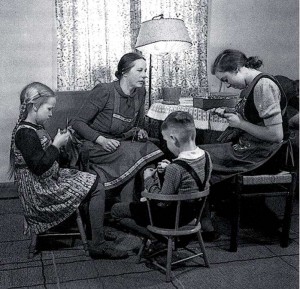 Oma was a knitter, she knitted her troubles away. Her fingers relentlessly raced though the yarn. She created things that have no name. Everything I wore was a knitted thing. I don’t even like to remember her scratchy, itchy, thick and grey undies she created for all of us. What a torture, when I sat down it would scratch me so bad, that I was sore all day. Thea was the one who helped her create those unmentionables. Yes Thea was Oma’s favorite. She would sit and knit with Oma, while I snubbed my little nose at both of them and ran outside instead to play with other kids. Needless to say.. Thea was undeniably Oma’s darling.. while she had no place for me. Again.. the ‘wild child’.. was out.

Aunts and cousins came to visit.. and they dared say.. Oma was their’s too and I would fight for my right to her, saying “She is living here with us.. she’s MY Oma!”