You are here: Home / My Childhood / Fear struck 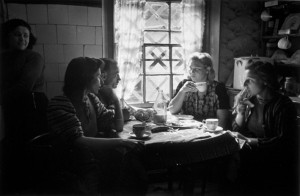 Right when the war ended there were unbelievable things that happened. The Allies had conquered our part of Germany but later on traded us for a part of Berlin, Germany’s Capital. The Americans had not hurt us at all, in fact.. as I described earlier, they actually did feed us.

But when the first soldiers appeared, we were very scared.

I was hiding in our backyard, because I heard heavy boot steps at our garden gate. Three uniformed American soldiers came to our front door, asking for “the Mr of the house.” I remember my father coming down the stairs ever so measuredly and slow. I heard one of the soldiers ask :” Guns? Cameras?..” I’m forgetting what else they asked for.

Dad said he had a camera only. The soldier demanded he hand it over to them. Not hesitating one bit, dad obeyed.

The soldier took the camera out of dad’s hand, and I know how much pain this caused him. There are no pictures of our family past this event. The camera was one of our most priceless possessions. The family picture on this blog, was taken by a professional photographer, so at least we have that one.

The American soldiers were satisfied with the camera.. they knew there were no weapons in our home. I was shivering with fear in my little hiding place, while all of this went down. But, thank God, no one got hurt, these soldiers just were making sure there was no danger lurking anywhere.. danger to them.

A different life had begun, little did we know how different.

No one told us that we would be taken over by the Communists. Right here.. something very strange happened.

An uncle, the husband of one of mom’s sisters contacted dad. Shortly after the initial contact, he appeared at our door. Dad and uncle Claus vanished into dad’s office. Hours later they emerged a bit peeket around their noses. Dad whispered with mom, everything was so very hush-hush. As it turned out, uncle Claus had been a Nazi-sympathizer.. and he was afraid. He asked dad if he would be able to hide in our attic for a while. What my parents were discussing, I never found out, but I could imagine what it was about.

Uncle Claus would act nice around us children.. he even taught me how to whistle using my 2 hands.. This, to me, was so very kewl.. and to this day, I know how to whistle that way. Dad meanwhile had decided.. he could not endanger his family with uncle Claus using our home for a hideout. After a few days.. uncle Claus was gone as quickly as he had appeared. I do not know what happened to him after this, but no one, not even his family has seen him again, ever! This happened to a few men in Brachwitz. They vanished, to never be seen or heard from again.

A tragedy for the families, no doubt. What they had been guilty of, I never found out and neither did their bereaved families. A very sad chapter in my memories and all that happened in Brachwitz during and after this insane war.

We all got hurt.. badly hurt, some of us more than others.