You are here: Home / My Childhood / Frau Liebig

And then there was this thing that drove mom right out of her mind. It would have done the same thing to me, I just know it. People from bombed out places, like the real big cities like Cologne, Hamburg etc.. no longer had a home.

The crazy Nazis didn’t think about this, or better yet, they could not have cared less. We were located on the center of Germany, and all those people who were fleeing the Eastern parts of Germany because they were scared of the Russians pressing in.. were now forced to move in with families in our parts of Germany. Anyone who had a big home was forced to take in those fleeing families.
We had about five different families moving into our home at one time or another. These people were now dirt poor and literally had nothing.

People who lost everything, leaving behind farms, homes and all their possessions were now the latest victims of Nazi evils. The Liebigs moved into the room that used to be our playroom. Mr Liebig found work in Halle, Mrs Liebig was at home being a very busy housewife. She was always in a hurry.. scrubbing floors, washing clothes, cooking etc. This lady could cook. But the most important thing to me was.. that her and I became fast friends. She would talk and talk about her farm.. her animals and how busy they used to be with everything. My mom would be so annoyed having another family in our house. Mom and Frau Liebig would take turns scrubbing our entryway. It wasn’t a ” foyer” you know.. it was a big entryway, the tiles were burgundy red.

Mom would scrub it once a week and Frau Liebig the next week. I thought to myself: Frau Liebig is doing a much better job getting this floor clean than mom!” Frau liebig would be on her knees.. taking this big brush and scrub so hard I kept thinking that the tiles would be all scrubbed away! Mom, though, kept saying that Frau Liebig did not do a good enough job, that she would forget the nooks and crannies, but I kept thinking, Frau Liebig did a better job than mom.

Of course I kept these thoughts to myself. To aggrevate mom would mean big trouble.. the worst being.. she would make me practice that hated piano “Hast du heute schon geuebt”? The most hated sentence of my chilhood. To this day the sight of a piano is very very aggravating to me.. Hate that thing!

Frau Liebig had brought some high-heels with her from her home. Once I saw those, of course I needed to try them on.. and yes this sweet lady allowed me to walk around in her heels. Of course my foot was so small and the heels were way too big. Little did this bother me.. I would stalk around in them, showing mom. She would order me to take them off.. pronto. How come everything that is fun, I can’t do? I asked myself this so much.

Schnippe, my youngest brother was seven years younger than I, and my favorite by far. I babied him, I saw to it that he had some food, took him for walks in our hills by the river Saale, played ball with him etc.

Tante Grete was the one who had figured out how to “rid” mom of one more mouth to feed. The first to go was Helmut, I was next. Tante Grete found a so called “Christian Girls Highschool” in Gnadau, a small town just south of Magdeburg. The school in Gnadau was not at all what it was cracked up to be.. it was more a place of torture for freedom loving girls like me, but Tante Grete.. who stood by mom since dad died.. had decided that this was the place for me. I was in tears hearing about the plan, I mean, how could I leave my beloved Brachwitz, the hills the river.. the sounds from the farms.. and that warm dirt there was so much of in the summertime, squishing through my bare toes. We never had any shoes, we could not wait for summertime, so we could go barefoot. All this was suppose to be over with, because Tante Grete and mom decided I had to go. I understood the no food situation only too well and I thought that maybe in Gnadau I would get more to eat. So.. after many tears and begging to stay home, I went to Gnadau. It ended up the most hated place I had ever been in. The teachers were real mean.. and the ladies who oversaw our living quarters were way meaner. I am sure there are people out there who went through the Gnadau experience and loved it. To not hurt their feelings, should they read my little memory-blog, I will not detail just how mean those people in charge over us, were.

Just one example I will talk about. One evening there was a meeting in the cafeteria.. for all girls and the teachers and the ladies who oversaw our living quarters. One lady stood up in front, a big basket sat on the floor next to her. She started to talk about individual girls.. saying good and / or bad things about them. Then.. out of that basket she pulled a bed sheet and she held it up as high as she could. I hear her very sharp shrill voice proclaiming:”This one is Adelheid’s bedsheet! You all can see how filthy it is! Adelheid gets up during the night going to the bathroom with bare feet, then she slips back into her bed with those dirty feet.” I wanted to die for shame, I tried to hide my head.. but everyone in that room was staring at me. Did I really deserve this humiliation? This is an average way we were treated: Mean, cold and no food.. again, of course, some girls were teacher’s pets, but I sure wasn’t one of those lucky ones.

I sought solice in walking in the pretty nature parks, surrounding Gnadau. I had decided I was happiest when I was alone. Because when I was alone I could talk to my best friend, God. He listened to all of my pains and joys. It was of great comfort to me that a so over-the-top huge being as God.. would even bother to listen to such a worthless, no good for anything kid. He not only listened but seemed to guide and comfort me. He did not seem to be the same God they talked about in church.. just not! What I heard was formality and fine robes and stuff.. and nothing is real enough for me to relate to it? Still one thing I was not clear about and that was: “Who is Jesus?” No one ever explained that to me. How come? Thus.. I kept my relationship with God just the way it was:”Simple” and He remained (to this day b t w,) my best friend. 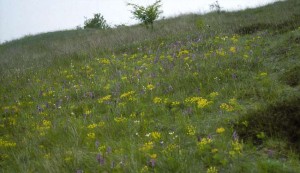 Once a month we were allowed to go home.. and I could not wait. I was so happy to see mom, my beloved Schnippe, Helmut and Thea (Dorothea). And of course Frau Liebig. She would patiently listen to all of my Gnadau pains. and her compassion for me was so comforting, yes, I loved this lady. I would have a great time in Brachwitz, running barefoot through my beloved hills, swimming in the Saale river, talking to friends. then on Sunday night it was time to return to this hated place. Schnippe took me to the bus. Him and I kept hugging and kissing each other.. crying and hugging some more. then Oooops.. my bus had left with out me.

All that Schnippe and Adelheid love and hugging.. made me miss my bus. Oh boy, the fury that awaited me at home. Mom was real real mad and she said:”Fine.. now you can walk to Halle, and still try and catch your train to Gnadau. I just cried. Someone overheard this conversation.. Frau Liebig. She came rushing to my side and said:”Don’t cry little one, I will walk to Halle (about seven or eight miles) with you. She hugged me, and I heard mom saying:”No Frau Liebig, you should not do this, it’s her fault, let her figure it out by herself!” Frau Liebig did not answer.. She grabbed a sweater, took me by my arm and out the door. This lady walked me almost to Halle.. She turned around about one mile before we reached the public transportation that would take me to the big train station. She hugged me.. we waved.. and soon I no longer saw her. What a lady.. how much I loved her, I still do.

Much later.. the Liebigs had two daughters, the eldest was “Annemirl”, it’s how her dad said her name. I hope Annemirl will read all this, I don’t know where she is today!

Share this:
Filed Under: My Childhood Tagged With: Frau Liebig