You are here: Home / My Childhood / Frightening Changes 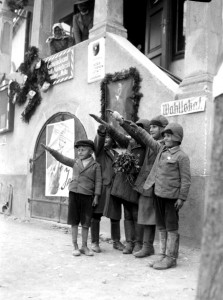 Mom finally explained to me what war means. Little could I comprehend what it really meant.

Dad, the most honest person on earth, preached from the pulpit to not vote for Hitler, and once Hitler was at the helm of the German people dad thundered against him.. telling people to protest where ever they could. Not only did the uniformed SS come to our door once to pick up dad and take him to only God knows where.. but they came 3 times to arrest him.

I can only imagine what mom went through, but I remember how it affected me. I could not pay attention in school at all. I would cry all the time. Once my teacher tried to teach us when to capitalize a word. He said:”If there is a Der, Die or Das , then you need to capitalize. Example he gave was “Der rote Kamm” (the red comb). Remembering what he said I wrote :’Der Rote Kamm”! WRONG !!! It should have been “Der rote Kamm”. “Red” would not be capitalized but instead “Comb”. Well.. teacher not only pulled my left ear, but he called me to the front of the class, and he took a bamboo stick and slapped my bottom with it.. 3 times. It hurt, and I got angry.

To keep thinking and wondering where dad was.. and what maybe was being done to him, and to have to worry about this stupid comb, was just too much for my little 6 year old head. This was the day after I forgot to take home my blue sweater and I just knew it was my fault, the Nazis took my dad. Guilt, Guilt Guilt.

I was playing with some kids outside, in front of a little store. Being a “wild child” as I was told so often.. a fight broke out between one of those children and myself. I started to hit that kid as hard as I could hit. Suddenly a lady was on the scene, the kid I hit.. was her son. She screamed at me:”If you hit my kid again, I will tell the police and they will come and haul off your dad again and maybe this time, he will never come home again!” I Terror stricken, I ran home and bawled my eyes out.

Another time, walking down that cobblestone street, a girl, much older than myself.. came into view on the opposite side of the street. She raised her right arm and said loudly: “Heil Hitler”! expecting me to return that very same greeting. Oh how wrong she was.. I did nothing of the kind. I hung my head.. and I ran away. Then I said to myself:”Oh no, now she is going to the police and have dad picked up!” It was just torture for me. There were several adults in our village who were staunch Nazis. I was scared of them, real scared. If I saw these people coming toward me in time.. I would run.. if not, I would mumble under my breath, real low: “heil hitler..” Oh my God how much that ached me! But, there was nothing I would not do to keep those Nazis from picking up my dad again.

By the way.. much later, when we were under the Commies, the Russians.. those very same adults now were Commies.. they had changed colors.. from Nazis to Commies. We call them “Manteltraeger!” (wearing your coat according to where the wind blows from)

Do remember this: The only difference between the Nazis and the Commies, is their color. Nazis = Brown, Commies = Red.

Now then there are things happening in American right now that I fear. Total control would be their goal. No freedom of speech and the people would be nothing short of slaves. I see this in “NWO” open borders, no enforcement of illegal entry into our country. If there is any subject where you cringe and you want to say “NO” but you don’t because you must be politically correct, then this is the beginning of your loss of freedom. I do to this day always say what I think, and I never am politically correct, I refuse!

This just to maybe wake up some of those who knukkled under already.. being afraid to speak their minds.

Take it from someone who was there!: “Don’t ever agree with something that you really deep in your heart do not believe! Stand up for what you deem to be right!

Remember.. if you don’t, you are aiding those who want to rob you of your freedom.. and in the end, enslave you!