You are here: Home / My Childhood / Gather the Crops

On school free days it was our priority to go out into freshly harvested fields to gather the leftovers. All wheat, rye, corn, and oat fields were our hunting grounds. While harvesting, those machines would leave behind those precious sought after kernel heads. It was what we were after.. to make cereal.. or if we had enough of them, to have Mr Henze the miller in town.. make flour out of them ( it ).

Here we went.. out into the fields with empty bags and mom expected us to bring them back home, filled to the brims. Easier said than done.. the fields were full of seekers and gatherers. Frau Liebig was one of them.

And she was by far the fastest gatherer.She had a way of making her hands and fingers fly from one find to another.. yes, Frau Liebig out sped all of us. To be next to her.. meant, you got nothing, because the precious kernels vanished into her bags at lightening speed. No mercy here… if you were faster, well then you got the most.

Frau Liebig’s bags were full, before I even had 10 kernels. 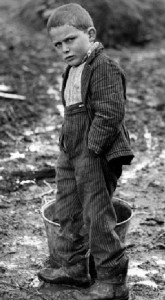 And then something else happened that so slowed me down. My little brother Helmut got into a fight with an about 13 year old boy, who was from Halle. The field though belonged to Brachwitz, and Helmut made this very clear to this ” intruder!” But Helmut was younger and smaller than the Halle kid, and started to get beaten up. Seeing this, I got into the action.. and went after this mean kid from Halle.

As small as I was.. I did beat up this much bigger boy.. getting him to leave little brother alone. The Halle kid ran off, scared of this wild little girl, who threatened to “kick your lights out !” So this went rather smoothly, but my bags were still empty, while Mrs Liebig’s were full. Now I needed to get to work, seriously.

Having been successful getting rid of that Halle kid, I went to work.. and finally filled my bag with this precious, would be cereal food!