You are here: Home / My Childhood / Gnadau – The Angry Child Strikes Again 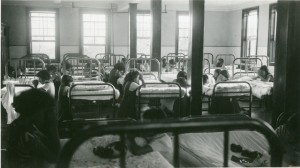 Tante Grete did this, I just know it. She was mom’s single sister, an RN . After dad died. Tante Grete tried to take his place financially and with other important decisions, thinking she was helping mom. She might have succeeded in this.. but in the process nothing but hurt me.

She was the one who sent me to “Gnadau”. Oh dear, how much I hated this place. It was called a “Christian” boarding school, but like so many other “Christian” places, would turn you away from “Christianity!” The reader will already know what I am referring to here.

This boarding school surely did not live up to being “Christian”, not one bit. At the time, however, as a young girl, I thought it was me who was failing, and not them. Once again, rather than instilling Christian love, they instilled overwhelming feelings of guilt.

The nuns would say things like: “A pastor’s daughter should know better than this…. Your father would turn in his grave if he know what a bad girl you are!” Yes, quote unquote, a so called “Christian sister” said this to me. Guilt, guilt and then some more GUILT! Gnadau being the finest example of things like this.

The place was staffed with mean people, mostly single women. In fact, they were the meanest. One of the “sisters” saw me walking in the yard with a boy my age. (Oh horror..!) She approached me later, saying: “You bad bad girl.. Your father would…..” Yes, she said it.

My crime? Walking with a boy instead of a girlfriend.. unthinkable. When mom visited to check on my achievements in school, she heard these exact words from Schwester Katrina: “Ja.. Adelheid will have to experience life’s worst blows before she wises up!” Mom repeated this to me word for word. I felt guilt, and then more guilt.

What a terrible teen I was, bad girl, wild bad girl! It is a wonder I did not turn my back on “Christianity” alltogether. But I had figured out, yes, all by myself.. that God had absolutely nothing to do with heartless, mean people.

With my terrible guilt feelings, I turned to God personally. What did I find? Compassion and unconditional love. Deep down I knew the truth.. and this knowledge saved my inner self. In fact.. it made me cling to God even more.

Everyone is responsible for their actions.. and I am very glad I do not need, nor do I have the right to judge anyone for their actions. I often would recall my rides on “Rickety” alongside my beloved river Saale.. and the long talks I had with my “best friend” God! I felt, He was misrepresented by the people who were my teachers in Gnadau. But, like I said a minute ago, I am not their judge or jury.

For supper we had “Mehlsuppe” (floursoup.) This was my most favorite meal. Thing was you could put enough sugar in it.. til it was edible.. and to me, delicious! Then all of us girls slept in a huge room, called “Schlafsaal” (a huge sleeping quarters) My bed was located in the center.. I had sleeping people to my left, my right and in the front and back. Just how much “damage” could a wild child like me do in this situation? Nothing much unless you had a vivid imagination. I mustered some of this vivid stuff.. yes, I did!

After the “Good night” Schwester left the sleeping quarters, I made my move! Quiet like a mouse.. I escaped. Getting outside.. deep in the night, I aimlessly wandered through the Gnadau landscape. Nothing specific on my mind other than to “Escape!” After I had my fill of a cold rainy hour or so, I now had to sneak back into this wonderful sleeping room. “Tja! Got you!” I heard Schwester Winifred growl. “Where do you think you are going?!” Terrified I stuttered: “I needed some fresh air!” The aftermath is self explanatory.. All the teachers found out about it, but worst of all.. mom did. Mom found out how disobedient and bad I was.. again ! Guilt guilt.. Poor mom..

Academically, I pretty much failed, except in music and P.E. Are those “academics” not sure.. but those were my favorites. In math.. I regularly pulled F’s. My math teacher nothing short of hated me. Once I went to her, confessing that I had copied my math work from the smart girl sitting next to me. My teacher’s reaction: Negative, needless to say. She now hated me some more.

But my thoughts were on Mehlsuppe, because I always was hungry.. the story of my young years. This just about sums up my wonderful years at the Christian boarding school, Gnadau. Those who loved that place.. I hope.. will never read my humble little writings! Yes.. there were those.. the teacher’s pets and the like.. which I was surely not one of!

Even if it was negative, I would take it; Attention that is! My mind was very busy finding something that would get me this so much desired attention.

Finally it came to me.. Think!: Salt! Yes! I managed to get a pound of salt and now a certain plan took shape. Into the beds of my very “favorite people” I tossed a handful of salt. I could hardly wait til bedtime! Finally, once I was tucked into bed, here it came: One after the other of my “victims” jumping out of bed, screaming, taking their sheets off their beds and shaking them out furiously! It was a huge mess. Even those who I spared ended up having salt in their beds, via their feet. “Who did this!?” I heard someone say..  deeper and deeper I hid under my blanket.

Even though it was real late by now.. here came Schwester Winifred screaming on top of her lungs: “Whoever did this.. come out and talk to me!!” I remained silent.

The next morning I was approached by one of the house mothers. How did she know it was me? She guessed, I suppose, because my not-so-sterling reputation.. made me ‘suspect #1’. I admitted it right away because, after all, my goal had been attention, and here it was.

I developed a reputation for pulling pranks.. even though they were very childish, I never shied away from a good one. “Good” inside of my head anyway. Of course I was punished.. my grades went down.. and my teachers disliked me even more.

I was in Gndau between the ages of 14 to sixteen. A very immature teen. Immature, because the things I learned in life were so very physically and mentally taxing..  I had no strength to learn things any 15 year old would know by now. To this very day I feel that I was cheated  out of a normal childhood and teen years.. and my memories are so very painful. Those crass “jokes” I played were the result of having been deprived of a normal childhood. It was my way of saying: “So there..! I got your attention, didn’t I!?