You are here: Home / My Childhood / Herr Haendel’s Sheep 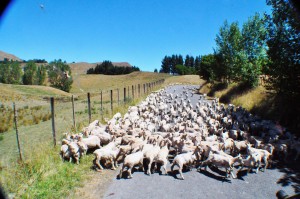 It had been a tough school day because we had a difficult math test. Math never was my fave, it took concentration.. the one thing I was never too good at. But I do have an excuse for this, I dare say that with an empty stomach you can’t think about anything but food, and math was not even anywhere on your “radar”, after all.. in real life, who needs it?

Fine, we all need addition, subtraction and some multiplication.. etc, but other than this? Well OK, you need to know how to use a measuring tape, but already here I see a slight problem, because in German we measure “centimeters” yet in English it’s “inches”.. I think the German way is easier because it’s decimal.. but why get into this? It is what it is, and I will never be good about it, even though I no longer can use hunger as an excuse!

Another thing happened at school, we had to learn Russian. Different alphabet.. everything a totally strange thing, and I keep thinking, “Enough is enough, my brain is full!” Finally school is over and I get to go home. Rickety though had another flat, and Herr Vopel said he did not have the right glue to fix the hole, so now what? I take the big old yellow bus, that’s what. At the bus station is the usual Brachwitz crowd, eagerly waiting for the bus. Several seats on the bus were unofficially reserved for certain “important” people. Annie was one of those. This one seat would respectfully remain empty til her Highness arrived. Flipping back her gorgeous blond locks.. she would enter the bus with a certain clout, everyone greeted her respectfully and pointed to “her” seat.. making sure the lady knew that everyone was aware.. this seat was hers and only hers. With this certain smile of hers.. and the confidence of someone indeed very very special.. she would finally sit down, after assuring herself everyone had noticed her arrival. OK Annie.. we got it, you are gorgeous, and in Addie’s mind, stuck up to the max.

I never found out why she was important, or what she did that was special, I think it was all about her beautiful long blond locks, but that’s just me.

Finally the bus starts rolling, off we go. Halle was a trafficky town even then.. and it took the bus a while to get out on the more open road. Lots of turns.. and the people who had found no seat and were standing, held on for dear life, to not accidentally fall onto the laps of the seated important people. I always was one of those standing ones.. because after all, I was only a kid.

We took the last turn in the road.. that ended at that little duck pond called “Teich” in Brachwitz.

This though did not happen until we were clear to go ahead because, yeah.. guess what? Mr. Haendel’s herd of sheep. There must have been 1,000 sheep in the road.. guarded by 2 big dogs. Mr Haedel.. in his hand a long long cane and on his head a wide brimmed hat. He was in no hurry at all. After all, you can not hurry up 1000 sheep, you know? They have their own pace and those 2 dogs can only do so much to gather the strays back into the herd. What to do? Nothing, our bus patiently hobbled over the cobblestone street, the speed determined by this herd of sheep.. I was hungry, of course.. and impatient, patience not being a virtue of mine. I grumbled to myself, but then.. I’ll bet, Ms Annie did too, but her lips weren’t moving. I just have to learn to keep more quiet and not let everyone know what I’m thinking. I think I got a little bit better at it, but not real good, cause I catch myself saying out loud what I am thinking all the time.

Finally Mr Haedel and his herd, even if ever so slowly made his long awaited right turn, and the bus went straight. That day, the bus did not stop at the “Teich”.. but instead right at the bakery, right across the street from my home. A long hard day finally over. “Are we having something to eat tonight, mom?” I shouted as I entered through the front door of home!