You are here: Home / My Childhood / Igelitt Shoes 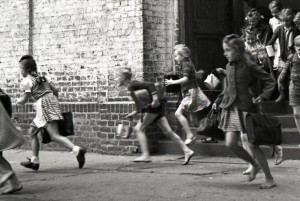 If it had never snowed or had been so terribly cold, well then we would not have had this problem. We would have just been barefoot all the time. I loved it anyways, I never felt any pain when I stepped on little pebbles or rocks. My feet were used to it, besides I liked the warm dirt squishing in between my toes. To be barefoot was my way of life, and when winter came, I hated to wear shoes. The only ones I ever had belonged to Tante Grete and they were as big as boats. So, I wore lots of socks because that way the boat remained on my feet. They were boot-style.. laced all the way up. Since I didn’t know anything different, it did not bother me too much.. except for the huge blisters I always got. There was absolutely nothing to be had in the stores… First the Nazis had plundered us and now the Communists did. But no one stared at you. We all looked very much alike, we were all hungry and of course, we had nothing to wear. 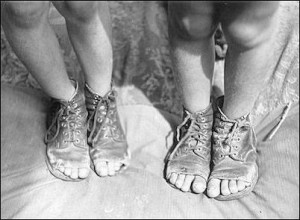 I had to go to my piano lesson, and Dr Kleeman was waiting for me. I had the money for the lesson in my coat pocket. Getting off the bus, right there on the corner, stood a guy with sandals in his hands.. gorgeous looking sandals. Red, yellow and blue.. beautiful colors.. and ah.. I had to get close to take a look. Sure enough, those gorgeous things were for sale. I touched them, they felt like plastic.. I asked the guy “What is this.. what are those sandals made of?” He said : “Das ist Igelitt” Igelitt.. what is that.. I wondered.. then I heard him say “I don’t know what Igelitt is either”.. as if he had read my mind. The sandals were high-heeled and had straps hugging the ankle. I got so excited and before I could think about it all, I heard myself say : “How much?” He mumbled some number. I pulled my piano lesson money out of my pocket and I bought a pair. My first Igelitt shoes. Ha! I was so happy and proud, but suddenly it hit me. I had spent Dr Kleeman’s money! What was I going to do now?

I went to my lesson anyway and I told my teacher I could not pay him today, because I spent the money on a pair of beautiful Igelitt sandals. Dr Kleeman said “Show me.” He took that precious purchase into his hands.. He gasped in horror and said: “You spent that money on some real junky pair of something that resembles a pair of sandals.. go run girl, find this guy, ask for your money back, and return these things.” Easier said than done.. The guy was gone of course. Back at home, mom was hugely upset.. and then.. I tried on my beautiful purchase. My feet slithered around in them and the ankle strap would not close. Then.. to my horror, they ripped apart all together. Now what?

I went to the “Grube” our cooking station. It was a box that was heated with crumbles that resembled something looking like tar crumbs. It always was glowing red and real hot. I took a knife and heated it in those glowing embers, then held the knife in between the ankle strap of the shoe.. and the place it had separated from. It stunk.. it stunk so bad.. it was nauseating. But, what do you know, it melted that Igelitt.. and now it would stick together again.. voila’.. I had fixed my shoes! I was so proud.

A bit later in time.. Igelitt was the hot thing of the day.. and everyone wore Igelitt sandals. I had been a real trail blazer.. right?

One day, my little brother was crying because his Igelitt sandals were ripping apart. He came to me crying, asking me if I could fix them. By now, I was the expert in fixing Igelitt shoes. So I took that knife.. you know, the one I used the first time for my shoes..now called “The Igelitt Knife.” It was full of dried on goop.. stinking hard plastic. I took it.. and did my thing, I fixed my little brother’s sandals.. They held about 10 minutes and he would come back to me asking me to fix them again! 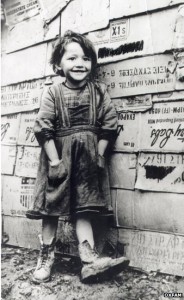 I do not know how many people do remember the “Igelitt-era” in East Germany. Probably not too many. But I know for sure.. my little brother, my piano teacher.. and I, yes, we do remember…