You are here: Home / My Childhood / Invincible! 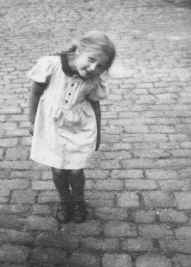 After all and everything I experienced and lived through I became very survival oriented. There was not much compassion found among the people. Survival to the fittest.

Uncle Ernst lived in Halle and his place was always heated and somehow there always was food. His place was where I would go to when the bus was late.. or did not run at all. I had to spend many nights at his place, but this was a treat.

Uncle Ernst was always very good to me, it seemed to me, he understood me and my “wild child” personality. Mom did not like him much, but she never shared with me why she felt the way she did. Uncle Ernst was married to a lady I did not know very well. She was what we called: “a bit scatterbrained,” and our relationship was not close.

It was on a warm Brachwitz summer day, mom and I were in the kitchen. She was ironing and I was playing at the sink.. this sink, that provided the only running water in the house.

Oma had told me to never drink water after I ate cherries, because my belly would swell up and I would surely die. What? I thought.. this I have just got to try. 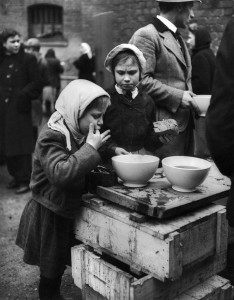 Here I was standing at the sink, after just having consumed a handful of cherries that I had taken from a tree that grew at the Morlstrasse. I climbed up and picked a handful and ate them. Of course the tree belonged to some farmer and I had better not get caught. Even though “stealing” was a very strict “no no”.. ever here and there I would ignore this strict rule, and stole some stuff that was growing somewhere. I got caught only once by a farmer who yelled some curses at me. But.. being hungry, his bad language rolled easily off my back. So here I am at that sink.. going for a drink of cold water. Oma had said that this would kill me, but I had found out that it was obviously not that easy to kill me, or I would have been dead a long time ago,

So.. what’s the harm I thought? Go ahead.. try and kill me, I’ll fight! The next thing was.. I drank and drank the water.. inspite of all those cherries in my stomach. Right I was.. nothing happened, not even the slightest little pinch!

I said to Oma:”Aetsch.. see.. I didn’t die!” She was speechless and mumbled something I did not understand. Suddenly the kitchen door opened.. and here, completely out of breath, shaking all over, stood Ulrica, uncle Ernst’s wife. She sobbed and cried and told us that someone had followed her all the way from Halle to Brachwitz.. she had been riding her bike. 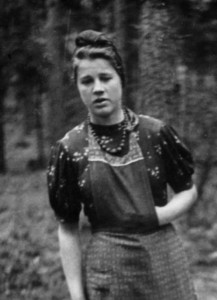 Mom said: “calm down.. no one followed you..” This became an argument, Ulrica said yes and mom said no, on and on. Finally mom told her to run on back home and that we were sure no one would follow her.
After she finally left mom stated that: “She lost it..” or something to that effect.

I think mom went to the neighbor who had a telephone.. and called uncle Ernst to come and pick up his wife. About a few weeks after this incident, Uncle Ernst contacted mom and told her that he had found Ulrica. She had hung herself over her bed.. She had put a rope on the ceiling.. and hung herself.. right over her bed. Another victim of the insane times we lived in. In spite of her warm apartment and enough food.. this lady had lost it completely. The insane pressures of the Nazi times somehow were too much for her. I do not know the details of her life and what she went through. All I know is.. she did not make it. Many of us didn’t.. yes, she was one of many!

As for me? I had survived again and I dare say: A drink of water after eating cherries won’t kill you! Well.. at least it will not kill me. I had gotten to the point where nothing scared me much.. and I would tempt fate whenever I could. I had become real tough and I tried to defy death.. wherever it seemed to lurk. It sort of became my personal little challenge.