You are here: Home / My Childhood / Losing My Dad 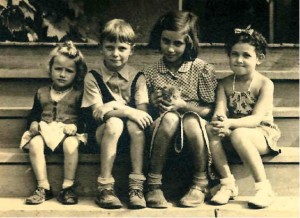 Losing Boo Boo was one thing, losing dad quiet another.

I loved dad so very much. He was the most honest soul I ever met in my life. Dad used to say that “Everyone has their flags out today.. because it’s my birthday..” very very funny indeed because this would always happen April 20th which is Hitler’s birthday, and yes, you guessed it, it was dad’s birthday too! What an odd thing, but true nevertheless. “All flags out, it’s Theo’s birthday”.. Ja, right!

When dad got sick there were neither doctors nor hospitals.. so he was taken to a 1/2 bombed out school, that served as a ” hospital”. Aunt Grete was a nurse so she went to be with him, that was awesome of her and so much comfort for mom. He got some sort of sepsis and died. Had there been penicillin he might have had a chance, but this miracle stuff had not yet been invented. 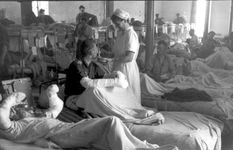 Before dad went to this makeshift hospital he gathered us four children around his bed. He then told each one of us what was good or bad about us.. and then he put his hands on us and blessed us. I remember what his last words were to me. He said:”You are a wild child, and you have to learn that things do not always go your way. You will have to learn to submit to many things my child.. including things you might never agree with.” To my sister he said:” You are fine, just the way you are.. keep obeying your mom and stay a good little girl.” I do not remember what he said to my brothers.

Little did he know.. that my little sister was being abused by a neighbor. She was a very quiet child and she never told anyone about it. Much later.. she committed suicide leaving behind two young children.

When “Mut” (Helmut) was about 11 , mom decided to ” give him away” because she just could not feed all of us. She gave him to some pastor’s family in West Germany.. and only God knows what happened to him there. He never talked about it. But he made something of himself.. He became a big-shot attorney and worked for the German Government. He doesn’t talk to me much, because he doesn’t believe in God, yet I do.

Christoph fared somewhat better because mom kept him at home. He was the baby and most definitely mom’s favorite. Later on though, he escaped the Communist Rulers.. and somehow managed to get across the border over to West Berlin. He earned himself two PHDs, one in Biology and one in Chemistry. Those two guys have brains.. real brains, I have always felt real stupid compared to them. Thing was, mom wanted me to become a musician and she forced me to that piano with a bamboo stick. But me.. I hated that piano with a passion and I wondered if it would make her happy if I would sing instead. I had.. well still have, a beautiful soprano voice. So.. mom was happy that I went to the conservatory for music in Halle, to study voice and of course, that dreaded piano. I hear her voice to this day:” Adelheid, hast du heute schon geuebt?”” (did you practice piano yet today.)

Of course, the answer always was “no”. So I would sneak to this ugly, much hated piano, and I would play real real low, so she could hardly hear me but on the other hand she could not say that I had not practiced at all.. either! 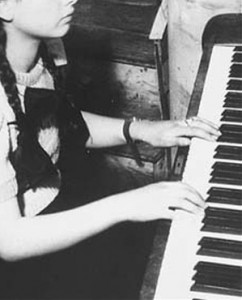 It was a constant fight, and the only thing I ever got good at was singing. Classical music only of course.

But as life would have it.. somehow I won a ticket to go to West Germany with a Lutheran Church celebration.. and once I had smelled freedom.. ate real chocolate and never went to bed hungry, I decided not to ever return back there into that Socialism hell. “Why should I? I said to myself. “Why?”

But mom had her ways, you know.. She wrote me letters that told me she had just baked some plum sheetcake with streusel. Hmm.. There was nothing like mom’s baking, and I also had gotten a little homesick. No one leaves Brachwitz and never wants to come back home.. no one. Figure the rest!