You are here: Home / My Childhood / My Escape From Communism

My Escape From Communism 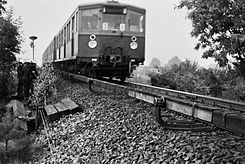 Meanwhile I was 17 and the memories of that little girl were still so fresh and they have shaped me into who I am today! To not become a bitter and negative person took much deep thought and putting things in perspective. But at 17 I was not in the place I am today, as an adult. As a teen I yearned for freedom and all the food I could eat, and of course chocolate.. and another thing I yearned for was pretty clothes and of course nail polish.

All the things not readily available under the Communists, everybody looked so much alike.. it was boring, and in a way , disgusting. If something was available in stores, it would , just for instance.. be a certain jacket for women and certain shoes. Imagine all woman wearing the same jacket, same color.. certain shoes etc… all the same. And so it was with food.. same same same. If bread was readily available, it would be rye and that was it. Hard to explain unless you experienced it.

Needless to say, I wanted out. Every once in a while a picture or an article would be “smuggled” in from the West, so all of us had a pretty good idea what it was like “on the other side!” All I had known in all of my life was being under total control.. and not even freedom of speech. The latter is so huge, I can not put enough importance on this.. I have no words to emphasize this. If one feels any kind of discomfort or even fear to say what one really thinks or feels, then it is almost too late.. because now the “political correctness” is no joke but it is serious fact.

One day a young man my age, who sort of secretly was a Communist came to me and said: “Look, I care about you and so I will tell you that you are in serious danger.. because you have a big mouth! You defended the Lutheran youth group against the Communist youth groups. It’s a no-no, and you know it. Get out, before you get into serious trouble for it!” Wow.. here it was “getting hauled off” again! Vivid memories of dad getting hauled of for speaking the truth from the pulpit, under the Nazis. Obviously no difference between them and the Commies. Control, control. Also. if you did not belong to the Communist youth group, you were denied a college education and many other important things.

I had had it, was angry and I wanted out! The only question was “HOW?” I packed a few things and headed for the train station in Halle. I booked a ticked to East-Berlin. I was not allowed to book anything past or beyond the East German border. We were locked in.. no travel outside of East Germany was permitted, period!

I did not say good bye to mom or anyone. the only one I took into my confidence was my sister. She cried and said:” Be safe sis, I will miss you so much, but I know that what you are trying to do is the only thing you can do..” we hugged and cried, then I left.
In Halle I boarded the train to Berlin.. “East..” that is.

Of course my plan was to ignore this stupid border, remain on the train and head for beautiful and free “West Berlin..” Ha, what was I thinking? The only thinking I remember was “OK, you are tiny enough to hide in between some luggage somewhere, and with a little bit of luck, they won’t find you, and you will ride on into heavenly West Berlin!” When one is 17 things don’t seem to be so complicated.. you just “do it!”

In West Berlin I had an aunt, who would be thrilled to take me in for a while, or so I thought. She was one of those aunts who did not like me much, because in her views as well… I was the “wild child.” Mom told me this, every time she got a letter from tante “H”, she told me how little she liked me.

Off I went, to freedom, well.. so I hoped. The wild child was taking on the Commies and their rules and orders and total control!

“Berlin ..” yelled the train station guy “alle aussteigen” (“everyone OUT!”) Here was that hated border, right through the center of Berlin, Germany’s capital. “Some nerve,” I said to myself. The train came to a complete screech.. halt. Silence inside the wagon, eerie total and complete silence. Everyone was scared, I could smell this so-well-known fear. Some of the people on the train were “want-to-be escapees” just like me. I could make them out by the expression on their faces and this little bit of trembling in their bodies, oh yes, I could tell who was scared and who was not. I was one of the scared ones. And here he came, this much feared, German guy in uniform.. The one who had sold out his own countrymen for the benefits, whatever they might have been. sold out to the “Reds.” 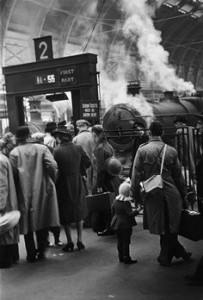 “Papiere bitte” (“papers please!”) he yelled. I showed him mine, that clearly showed him that I had no business still being on the train.. this train that was headed for Freedom-land. Oh no, I was supposed to have exited when the order was given “Aussteigen bitte ~”
The guy in uniform held my papers and turned his eyes to the person next to me.. another one of his victims.

I took this second to get away… I went and hid in between 2 large suitcases. Yes, I was tiny, but not tiny enough for my Red countryman not to grab me and command me to follow him. Follow him OUT, oh yes.. OUT. I was taken to a small booth, outside. In a tiny room all by myself for a minute, I devised a plan. I knew I would be strip-searched. Within 15 seconds or so, I had stripped bare-butt naked. Knowing full well that the person who would enter any second.. if he was male.. would be in huge trouble to be in a room with with a stark-butt-naked teenager! Yes.. my plan so far was perfect, a guy entered and immediately yelled at me: “put your clothes on!” “Well” I said “I was just trying to spare you the trouble of telling me to strip..” He knew what my plan was.. he was not stupid. He said again “put your clothes on” and with these words, he left the room.

Quick on my feet.. I was dressed, sneaked out of the room, hoping everyone who saw me would think, that I had been searched and declared “free to leave”.. and what do you know, so far, it all worked according to my sneaky little plan. I ran outside.. where to my horror the freedom train had started to roll. Roll without me inside of it! Darn.. so far for freedom. I ran alongside that moving train when I saw an outstretched hand. A woman was noticing me and my dilemma.

She yelled: “Take my hand girl..” Out of breath I ran and yes, I grabbed her hand.. God bless that lady.. she pulled me inside that freedom train. All the way in.. she pulled me. The train rolled faster and faster and within a minute or so.. we were in West Berlin. We were in Freedom land.. and these german countrymen in uniform, the “Red” guys no longer had the power to come after me! The train halted and I heard the voice of a guy who yelled:”Welcome in West Berlin!” I was free, I made it, do not judge me for my methods and my little tricks please, just please be happy with me to be free!