You are here: Home / My Childhood / No Doctors 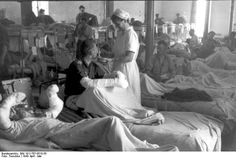 Mom kept saying: “If this Dr had done his job dad would still be alive!” In the midst of all the terror we were living through it was nearly impossible to find a doctor, any doctor. They were either “missing” or killed in the war.. just like many of our younger men. They were all drafted into the armies. This Hitler-war did consume all of our able-bodied men. Our women were either widowed or waiting to hear about their husbands, hoping that they would eventually return back home. Those were real sad times. When someone had died, the close relatives of the deceased wore black for one full year. There was much black in Brachwitz then. But dad was not killed in the war, dad got sick. His overall health had deteriorated greatly after being arrested and hauled off to jail those four times. Sitting at the dinner table one night, I remember that dad coughed and for some reason this scared me. I looked up and asked: “Dad, are you OK?” He just motioned for me to be quiet.

I do not know what this was, but I seemed to sense things that had not yet happened, I deeply loved my father and I was worried about him. The next day.. dad was sick and in bed. I was devastated because of a deep, dark foreboding inside of me, something that just can not be explained. Yet it affected me profoundly and I got sick and laid myself right next to him in his huge king size bed.

“What is the matter with you” he asked me. I answered: “I don’t know dad, but I feel sick just like you..!” It was as if I wanted to hang onto him.. not willing to let him go anywhere. The doctor, the one mom said was no good, came and gave dad some medicine. I watched very carefully, when he took the medicine.. and often said: “Dad, you just took some, you should not already take more!” How obnoxious for an 11 year old kid is that? He got upset at me and told me to stop nagging him and to please get lost. So what was I to do? With my unsettled and upset little head, I obeyed and left him alone. But my fear for him would not relent. I knew that my dad would die. It was not a mere feeling, it was an “I know.” Very very frightening, but I had no one to share my thoughts with. There were no hospitals, they all had been bombed out. Doctors were far and in between. Penicillin had not yet been invented.. which was exactly what dad would have needed.. or so we found out later.

A school building in Halle had been converted into a make-shift hospital, and that is were dad was taken.

Tante Grete was an RN.. she went with him to take care of him, what a blessing this was.

The bakery across the street from us had a telefon, and mom was called to the telefon by our neighbor. When mom returned she was as white as a sheet and she said she had to get to Halle, as fast as she could. Late that night, she returned.. and I knew that the unthinkable had happened.. my beloved father had died.

This changed our lives again.. things got more difficult.. Brunhilde had to leave.. Oma moved in permanently, and so did tante Grete. I don’t really know why, I was told that this was necessary to help mom. Four children under twelve.. in those unsettled terrible times, and no father, yes, I understood that mom needed all the help she could get. From this day on, tante Grete , or so it seemed to me.. took dad’s place, aiding mom to take care of us, and everything else.

But it turned out to not be help.. but instead a bigger burden on mom, because tante Grete got very sick and she died of cancer. So now mom had us four kids and Oma.

Oma did not like me a lot, but she liked Thea. The both of them would sit and knit and crochet and sew all day, while I looked for more exciting things to do. I did not care to sew or knit.. I was much more into running through the hills after school looking for pretty plants, exploring all the strange little creeping bugs.. and I loved to climb trees. I was a tomboy and could not sit still for very long. I needed excitement in my life.

Needless to say, I was in trouble most of the time.

Pretty soon all of my excess energy was turning into ‘something useful’ as mom would say. I took “Rickety” running from village to village.. looking for food. Some flower from the mill in Gimritz, an extra loaf of bread from the bakeries, just about anything edible. It was my job to find it where ever I could. To this day, I only eat when I am real hungry.. never because ” it is available.”

Frau Liebig, who lived with us, was my best friend, because she liked me and she let me try on her high heels. When her little girl “Annemirl” was born.. I loved to babysit and play with her.

Meanwhile school got more and more difficult, because they had added russian as the 3rd foreign language and I could not keep up. Math turned into a total monster too and I kept asking myself.. what I would ever need it for? Life after all was about survival and food.. so what’s math for? I never understood that; An empty stomach, math, 3 languages, chemistry and physics….etc etc, I just got lost in it all and mom was upset about my bad notes. There was not one person who ever asked me how I was faring with my feelings about my dad dying. No one checked how I dealt with it all. My sister was younger and very quiet. Her and I did not communicate much, we were opposites in everything. She never confided in me that she was being abused by a man in the village. Not one word. Yes, the same man had tried to touch me too.. but I screamed real loud and made a huge commotion, so he left me alone. Soon, mom decided she no longer could take care of us all and she sent one of my brothers to West Germany into a boarding school.. and shortly thereafter, she sent me to Gnadau, I wrote about this extensively earlier. It was no fun.. it was a terrible place and I much rather would have stayed in Brachwitz near my beloved river, the hills.. all the farm animals and ride Rickety, but it was not to be..