You are here: Home / My Childhood / Panzerguns “Tanks” 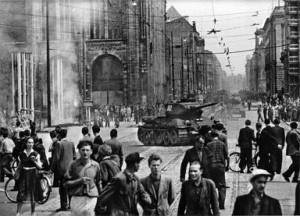 Germany was now divided in two. The Communists did not allow us to visit relatives and / or friends who lived under American occupation. No one could leave and no one could get in. We were in Jail now, and officially called: “East Germany.” We felt the same pressure and fear that we experienced under the Nazis. No difference at all.

Our letters to friends in the “West” were opened and read.. packages were ripped open, and precious things stolen.. it was another kind of hell that’s so hard to explain, unless you experiened it.

One day a huge mass of people had gathered in Halle at the “Marktplatz.” A large area where streets came in like into a wagon wheel. The center was huge and open, with streetcars and other public transportation having their main stops, for people to get in and out.. a big travel stop and change into different directions. A place that always was action packed. There were five streets leading onto the Marktplatz and the “red tower” was there, with it’s top razed off by bombs. I was there with a friend wanting to get into a streetcar to go somewhere.. I don’t remember what we were planning.

But, there was huge congestion. All traffic had stopped.. people pushed around.. screams to be heard and more and more people arriving making the whole place one big human-jammed place. The statute of Haendel surrounded and climbed on in the midst of it all. I kept thinking Haendel would be pushed of his socket any minute now. But Haendel stood. am, sure.. still proudly stands. Haendel was born in Halle.. and he’s so famous I think, because of his “Messiah” composition. In fact I sang:” Er weidet seine Herde ” (He feeds his sheep) many many times in several churches.

Suddenly I saw the reason for the huge panic: Each of the incoming streets were blocked by a russian tank.

The canons staring in our faces. People were screaming in fear.. yet the anger was bigger than any fear. People were beginning to push toward those tanks.. trying to climb up on them. Out of government building windows, burning papers were flying. Small fires started to burn in several places. Smoke filled the air. People got even angrier. It was mass revolution, people finally aired their grievances, boy, did they ever. My friend and I joined in and screamed: “Germany is ONE..” Suddenly there was this huge “B a n g…” and the canons fired directly into the masses of people. Yes.. they shot at us.

We tried to run but this was nearly to impossible.. because there were people everywhere, you could hardly move. I pushed my way through this mass-mess, inch by inch, foot by foot, until I found the front door of a house I could hide in. Thus from door to door.. I ran until I found an area with fewer people.. and totally out of breath, terror filled, I found my way toward the river.

Running for my life.. not knowing where my friend had ended up.. alongside the river.. I found my way toward hopefully, peaceful Brachwitz. My heart skipped.. it skipped for the very first time in my life. It has skipped ever since then whenever I am upset about something. Doctors keep saying it’s nothing to worry about, so to this day.. I just don’t worry about those aggrevating skips.

I ran and ran. things became peaceful and quiet.. I had managed to get out of Halle and was well on my way to Brachwitz, but I could not just walk.. I kept runnung as if hell hounds were after me. The river flowed peacefully as always… trees softly swaying in the breeze.. there was a little boat .. my God.. how peaceful it was, I realized how much I loved Brachwitz. This little village was more than my home.. it seemed more like Heaven on that fatefull day. Forget hunger.. forget the stingy farmers.. forget everything, Adelheid.. just try and stay alive, get away from Halle for now.

I finally got home. Mom was standing by the only place that had running water in the house, the kitchen sink, peeling potatoes. Peaceful sight.. “Mom” I screamed.
“Now what” was the reply. Out of breath I tried to explain what happened. Mom said:” Dear Me.. so what else can happen? Sit down, you look exhausted, I am glad you made it home !”