You are here: Home / My Childhood / Schnippe in Trouble

I would like to explain the alarm system in place, to warn us of either approaching, or already overhead.. bombers. Three long drawnout sirenhowls.. meant: bombers approaching.. get to your safe place. A wave-alarm, meaning up down, up down meant, save yourselves.. they already are here and the bombing has begun. The end of the attacks were loong drawn out siren howls. 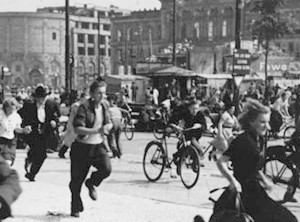 I was in school in Halle when the so familiar sounds started. Three loong drawnout howels. Get Rickety girl… hurry. Jump on her and pedal for your life. Easier said than done.. because my safe place was in Brachwitz.. and Rickety keeps having flats as usual. The sirens were howling, kids running over one another to get to their safe places.. everyone worrying about themselves.. no one was worrying about me and my flat. I said to myself that it would just have to be ok to ride rickety with a flat, what else was I supposed to do? And here it came.. the dreaded whowhowhowhi up-down sound.. The bombers already were over us. No time to lose.. Go Rickety go! 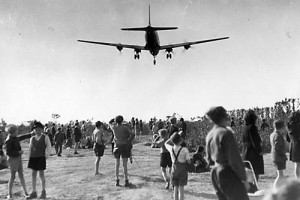 Nothing here was safe.. you either got away or you did not. But I had an ” Ace in my pocket” always. I had a friend who was bigger than those mean bombs.. and the now low flying smaller planes, that picked out a single person on the ground.. and shot at them. I had a friend that would protect me, I totally trusted him. God was my best friend. I talked to him real quick, asking for protection. I felt reassured.. as I always did when I asked for help.
After all.. my friend was not just anyone, my friend was Almighty God. It never failed.. peace came over me, I knew I was not alone, I knew who was watching over me.

From as early as I can remember… I had this huge faith in God, just did! It did not seem to matter much what other people were thinking or saying.. no, it had no affect on my personal relationship with God. And what was so very huge about it.. is that I felt.. and to this day feel.. Love.

So.. off I went. Limping Rickety was going to take me home.. I pedaled and pedaled.. and the flat was scratching the road and it made the weirdest noises. But this did not matter much.. Rickety was going to hold out, besides.. I wasn’t alone, my friend was God, and God surely could make Rickety run, flat or no flat. I got to my beloved river.. die Saale. I was not far from home now. I heard Die Flack.. the guns that tried to hit the bombers.. boom boom boom. 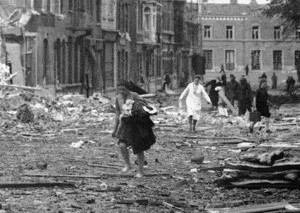 The sound of the many planes in the air.. made an ominous “hum hum hum”. A very distinct sound that always scared the willies out of me. This time there was something different. I noticed some low-flyers. Those planes were searching for people on the ground. People like me, alone.. on the ground. “God… please don’t leave me here all alone!” I cried. Poor limping Rickety, I was wondering if she would be fixable after this kind of abuse.

I got to Brachwitz, unharmed. A woman in the street yelled at me.. what was I doing outside.. I had better get into the basement at home.. Well.. yeah.. I knew this. Obviously she could not see that I was not alone.. I felt pretty safe. Common sense and survival instinct were constant companions also.

I kicked open our front gate.. and here I saw something that frightened me. Little Schnippe was standing in the yard.. peacefully chewing on a carrot. 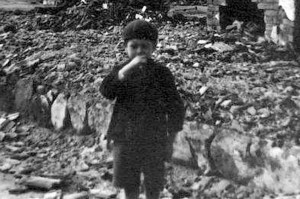 “Get inside, Schnippe!” I yelled. I ran up to him and knocked him over. He cried out.. I kept pushing him under a lilac bush. No sooner were we under the bush.. did I hear a sound. ” Rattattatta… bang..” Yes you mean guy, but you missed us! A low-flyer had detected movement on the ground.. and shot at us. Dust, pebbles.. dirt, stones, you name it clobbered Schnippe and me. But that was it.. Nothing deadly touched us, we were safe.

Schnippe has no memory of this, but I surely do. Little Schnippe was about three and I about ten.

When that low-flyer was long gone looking for the next victim, I grabbed little Schnippe and raced into the house, into the basement.

Once again we escaped death, as we had so many times before. Mom clasped her hands to her face and lammented: “Oh my oh my…. where did you find Schnippe.. and how did you get home from school so quickly?” Then mom just cried with relief. We were all safe one more time.