You are here: Home / My Childhood / Schwester Wilhelmine 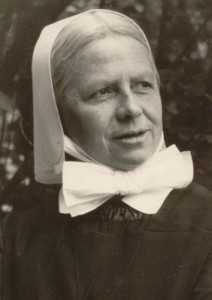 There she is, in my minds eye.. a vision in black. Her black habit hugging her like a cloud. A bit of her face visible, yes and on her head was yet another black cover, I don’t know what they call it. Mom told me that Schwester Wilhelmine wanted to marry my father before she came on the scene. But to her disappointment, dad married my mom, and when I was born the woman hated me.

As I grew up, Wilhelmine never did like me much. I feared that lady, yes I feared her with all of my being. I was downright terrified of her.

Wilhelmine was the only “doctor” in town. She was a nurse actually, but the village doctor nevertheless.

She lived right next to our church.. this ancient church that was build in the year 1200 or something. Very befitting I thought to myself. The church had a real thick wall surrounding it. It was maybe 3 ft wide on top and we children loved to play on it and even ran around on it playing “catch”.

Every time we were across from sister Wilhelmine’s house, I would see her face peering out of this small dark window.. She was always watching us. Often her right index finger would wag at us.. meaning : “You will all fall down someday and break your necks!”

Well.. that day almost did come, for me that is.

Right in front of Schwester Wilhelmine’s house, I slipped off that wall scraping my left leg from ankle to.. well way up there! Wilhelmine saw it, of course, and she called out to me to come on in and she would fix up my bleeding leg. I obeyed.. wondering if I would have done better to run home and show it to my mom instead. But who would dare say “no” to Schwester Wilhelmine? Not me.. Uh uh! So I went inside with her and she pulled out a small bottle with some yellow stuff in it. “What is this?” I asked? “Nothing you need to know” she answered, “Just give me your leg right here..” I bared that leg and let her have at it. The next thing I remember is that I thought all hell-fire must feel like this! I screamed.. she told me to hush up.

I screamed some more, because she kept putting that yellow stuff from the top of my leg clean down to my ankle. I remember NO other pain like this before or after! Did I detect a little smile on this women’s face?! Why, yes, I think I did..! God love her… grrrrrr. It was “Jod,” if you know what that is, that she put on my leg, yes “iodine” and this stuff would wipe out a herd of elephants, there is no doubt in my mind. Then I went home and told mom. What would mom say? She was glad my leg would not infect. That was about it.

This memory of sister Wilhelmine had to be written down, since in my mind, it surely is one of a kind!