You are here: Home / My Childhood / Soldiers Returning Home 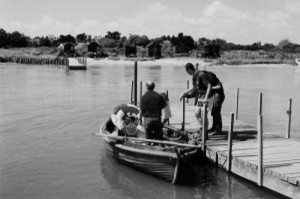 Herr Saalbach was the guy who ferried people across the river,” die Saale”. It wasn’t a very wide river, so Herr Saalbach strung a very thick and strong wire from one end over to the other. He had a little rowboat in which he stood up and with his hands he would grab that wire.. and inch by inch he moved the little boat from one side to the other. There were about 6 people in it at most. Herr Saalbach would talk about the weather and we always knew if we had rain coming or maybe a thunderstorm. Herr Saalbach was our weather forecaster. And, he was always right.

Thus.. being ferried from Brachwitz to Grube de Ferdinante, I then had to walk 3 miles to catch the train to Halle. It was one way to get there, the other ways were: walk, ride rickety, or take the bus. Grube de Ferdinante was the last resort.. if snow would not allow me to ride rickety, the bus got stuck in snow.. and walking? well.. you have to be joking, my little legs would have given out after the first few steps. Herr Saalbach and the ferry were our way to cross the river after the Nazis decided to blow up the bridge that was there, to prevent enemy troups to cross die Saale. I do remember the horrible explosion that ripped through Brachwitz when that bridge was blown up. I stood by our front door when it happened, it was the loudest noise I ever heard! Herr Saalbach then invented that ferry. He should have gotten a medal for his invention.. but he did not, I am sure. But all the villagers were grateful and thanked him. Herr Saalbach became Brachwitz’s icon. to this day.. he remains a vivid memory!

Right after that war was officially declared: over.. One of my ferry trips has a wonderful memory.

A german soldier.. looking dead tired.. ripped up uniform. torn boots.. just pitiful looking, got into our ferry in Grube de Ferdinante, on his way home to Brachwitz. All of us looked at him with compassion and love. What might the poor guy have seen and gone through, I wondered. So.. being me, recognizing who he was, I felt free to talk to him and I asked; “Won’t your mom be so happy to see you? And I am so glad to see you unhurt and finally coming home”. He replied:”Do you know if Elfriede is ok? Does she still live in Brachwitz. Is she still single, do you think she is waiting for me?” As far as I knew.. Gerhard and Elfriede were engaged. I answered and said:”Elfriede is home. I see her every morning at the bus station. He smiled and sighed and said “I can’t wait to see her!” Then we exited the ferry in Brachwitz.. and he ran.. no, he did not walk, he ran.. up that cobblestone street, up the little hill where Elfriede and her parents lived. Not much later.. I saw the two arm in arm.. wandering through the village, my dad had just married them in our church. A happy story at last! 😉 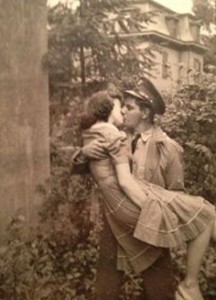