You are here: Home / My Childhood / The Moon And The River

The Moon And The River 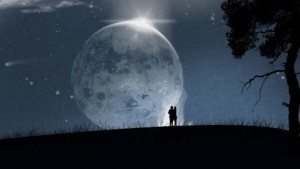 It was one of those days you are not particularly fond of, you know? The air was laden with moisture. It was sticky and warm. A strong thunderstorm had it’s grip on Brachwitz. For some reason it just would not move on, it lingered, it thundered and the skies lit up brighter than daylight. Every few seconds a vicious thunder would rip through the air and all of this would ‘drive mom up a tree’, so to speak. With every thunderclap she would let out a little whine, saying: “Oh please please God, would you stop this..” something like this she gasped. Sudden loud noises were something all of us were very sensitive to, because of past experiences during the war. Mom especially hated sudden loud “bangs”.

This storm had decided that Brachwitz was the place to be, and nothing.. nothing could make it move on.

Exasperated, mom said: “Why is this thing not moving on?” Not knowing how to answer, I said:” It’s the river, the storm can’t cross the river!” Oh no, the wrong thing to say, mom said: “The river?” I immediately back-pedaled from my statement, (because it just made no sense)… Instead I said: “Relax mom, it will be over pretty soon.” But.. it wasn’t to be, this storm was not going anywhere. Bang and bang and bang again. Yes this one was a bad one, scaring everyone, really.

Common sense told me, it would have to relent eventually, even if it would be later rather than sooner. Meanwhile I had to keep my cool to keep mom cool. Finally, the thunderclaps were less loud, the lightening less fierce. Sighs of relief all around. Were we relieved too early? Because don’t you know.. it got louder again and brighter and more violent. The thing decided to torture us some more. After hours of this, after all and everything , finally, there was peace, suddenly this monster storm had breathed out all of it’s fury and anger and it did relent. What a storm, yes, it was a real bad one.

The next day was a gorgeous one and the evening was so beautiful that it is very hard to describe. A full moon came up in a completely clear sky. Big and bright and the night turned into daylight, or so it seemed.

It was one of those nights that are hard to forget. Now.. if one lived in Hawaii or a place like it, then this would be nothing special, but in Brachwitz? In Brachwitz, this was as close to heavenly as one could get on this earth.

That was an evening one would want to take a stroll at the river. We could think of nothing better to do than to soak up the beauty and the stillness of this night. Yes, I now had a boyfriend, his name was Joe, and he was the nicest guy in the world. He and his family were refugees from the eastern part of Germany. They fled the Russians who came pressing into their area during the end of the war. Joe and I had become best buddies. we could tell each other everything without being judged or put down, in fact, we managed to uplift one another whenever possible. We understood that both of us had seen a small part of hell and had escaped and cheated death many times. We both understood each other so well that no other relationship in my life has ever equaled the one Joe and I had.

Because of the brightness of the moon, I did not realize that the daylight had changed into night. Fear gripped me, I was supposed to be home before dark, those were mom’s strict rules. I messed up.. this I did know. “Walk me home quickly” I said to Joe. When I got to the front gate.. it was locked! I went to the back of the house and called out to my sister’s bedroom window. “Sis.. the gate is locked I can’t get in!” Her head appeared.. she was upset and said: “Mom locked it. It’s after dark.. and she’s very very mad at you.. oh and, she said you are in for it “..Wow, this was bad.

Meanwhile mom had heard my voice, she came to the gate and opened it for me. With her right hand she opened the gate, in her left hand she held her dreaded bamboo stick. I was sixteen years old, but this meant nothing to mom when it came to capital punishment.

From the gate to my bed.. I ran, as fast as I could, and every step I took was accompanied with a clean across my body smack of that bamboo stick. Even after I pulled the thick featherbed over me.. Mom kept “firing” away at me with that stick. Finally she realized that the featherbed would spew feathers shortly if she would not stop.. so she did, she stopped. This whole thing was accompanied by a barrage of words like”You will learn to obey and if it is the last thing I have to teach you!”

The next morning I woke up with huge bruises and swellings all over my body. What was the matter with my mom!? I just could not imagine punishment like this was reasonable. Joe saw me that day and he was incensed and angry about what I had endured. Mom happened to like Joe a lot, and he liked my mom, but not on this day! Joe went to mom and he told her (what nerve!!!) that he was very upset about the beating I got for being with him, only a tad after dark. She did listen.. and I think I noticed some rue in her eyes.. indeed, mom regretted her anger at me. She then went to the kitchen and did some baking. On a pretty plate.. one of grandma’s very old keepsake plates.. mom presented me with some delicious freshly baked cookies.. My mom was sorry. Wow.. this was a first, an absolute first. This was big. Mom was sorry! That was the last physical beating I received. After this incident, things changed dramatically, for the better.

Joe had a huge influence on my mom and they became very good friends which was very beneficial to me! I do believe that after dad died, mom felt completely overwhelmed to have four children under the age of twelve, and she over-reacted and even completely lost all common sense when it came to disciplining the four of us. So, to not judge too quickly I always try and find out the reason why a person does certain things. Mom’s reactions were out of fear and I did realize it. Insight or not.. her ways were painful and not only physically!

I share this story with mixed feelings. On the one hand, it is a story about mom’s anger problem. But on the other hand, it is the true story of how these terrible times affected people, and who are we to judge and say that we would have done better? It’s a story about forgiveness.