Dad was listening to the radio, a familiar voice was speaking. It was a man’s voice and I just remember that I did not like it. Dad suddenly looked stunned and he turned his face toward mom. I do not remember what dad said.. but I do remember that mom broke out in tears, suddenly sobbing uncontrollably. I asked: “Mom why are you crying?” She said: “We are at war!” “What is war.. mom”? I asked.. and then I heard dad saying : “It’s something terrible..” So now I was stuck with something I didn’t understand. “A terrible thing called ‘war’..” is what I had to work out in my little 5 year old head, seems to me, no one ever explained anything to me. I either figured things out by myself and got it.. or I had to guess what things meant.

“We are at war.” I had no clue what this meant. Pretty soon though I found out, and what I found out wasn’t a bit pretty.

Just because I forgot to take home my blue sweater from school.. did that mean it was my fault that big mean looking guys in Nazi uniform where coming to our house.. hauling off my dad, to who knows where? No one explained it to me, so I figured because of my forgetfulness.. I was being punished. My punishment was that mean guys hauled off my dad. Mom cried a lot grandma did too. Neighbors looked at me with pitiful faces, never saying a word though. Fear, anxiety.. and distrust were in the air. No one trusted anyone, and no one told me it wasn’t my fault that my dad had vanished. 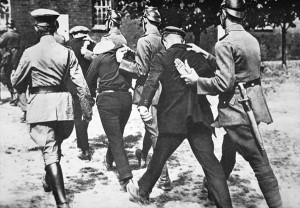 I wish I had never owned a blue sweater. This thing just caused too much pain you know? I didn’t even like to wear it anymore after I picked it up from school. In fact, I hated it. How is a child supposed to deal with real big happenings, if no one ever explains anything? I started to live in my own little world. I gave up asking too many unwelcome questions. But dad was still gone and no one told me where those mean looking guys in uniform had taken him. My siblings were all younger than I and I do not know what they were thinking. We did not have close relationships. Every one of us went our own little ways, seldom even talking to each other.

I did not like Helmut much and he didn’t like me either. Maybe it was because we were so much alike? Who knows. Schnippe though.. We were close. My sis seemed to have her own life too, and she spent much time at the farmer’s house next door. Siggy was the farmer’s eldest daughter and my sister’s best friend. I think they fed her, because she never ever was as skinny as I was.

One evening I found myself staring through the farmers kitchen window.. and they were eating dinner. A very big table with family and the “help” all gathered around it.. eating. I got so hungry watching them, that I ran home crying.

My sister said: “That’s just not fair, they are eating and we are starving”.. and she the next day told Siggy to give her some cookies. She brought the cookies to me saying: “This should make up for last night.” Lucky Thea, she was better off than me.. obviously her friend shared some food with her here and there.